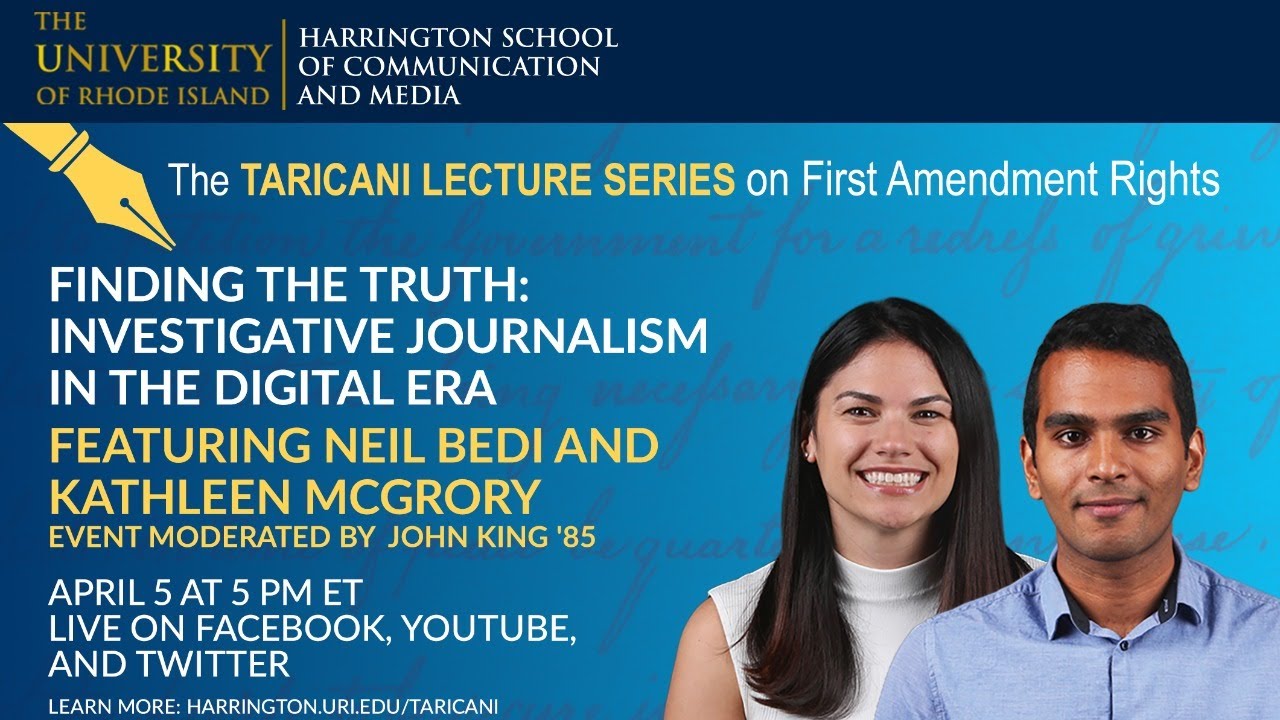 Long-time reporting partners Neil Bedi and Kathleen McGrory of ProPublica discuss their approach to in-depth investigative reporting — one that combines traditional shoe-leather techniques with data-driven analyses and digital storytelling and relies on the freedom of the press as protected by the First Amendment.

They explored how that approach allowed them to uncover a predictive policing program that harassed families, an alarming death rate at a revered children’s heart surgery center and more.

A question and answer session with students was held after the lecture.

Neil Bedi reports on the federal government for ProPublica in Washington, D.C. Previously, he was a reporter for the Tampa Bay Times in Florida where he worked on stories about patient safety, worker safety, criminal justice, government inaction and more. In 2021, he won the Pulitzer Prize for Local Reporting with Kathleen McGrory for their investigation into a sheriff’s predictive policing initiative that targeted families and profiled schoolchildren. Bedi and McGrory’s 2018 reporting on an alarming death rate at a Johns Hopkins pediatric heart surgery center won the George Polk Award and was a finalist for the Pulitzer Prize for Investigative Reporting. Before becoming a journalist, Bedi was a software developer. He studied computer science at the University of California, Los Angeles School of Engineering.

Kathleen McGrory is a reporter at ProPublica. She was previously an investigative reporter and editor at the Tampa Bay Times. In 2021, she and Neil Bedi won the Pulitzer Prize in Local Reporting for their investigation into a police agency that harassed families and profiled schoolchildren. In 2019, she and Bedi were finalists for the Pulitzer Prize in Investigative Reporting for their series on patient fatalities at a Johns Hopkins children’s hospital. Kathleen holds degrees from the Columbia University Graduate School of Journalism and Hamilton College in Clinton, N.Y. She started her career at the Miami Herald, where she covered breaking news, education and local and state government. She is an adjunct instructor at the University of Florida and helps train professional journalists through the Poynter Institute and the University of Southern California’s Center for Health Journalism.