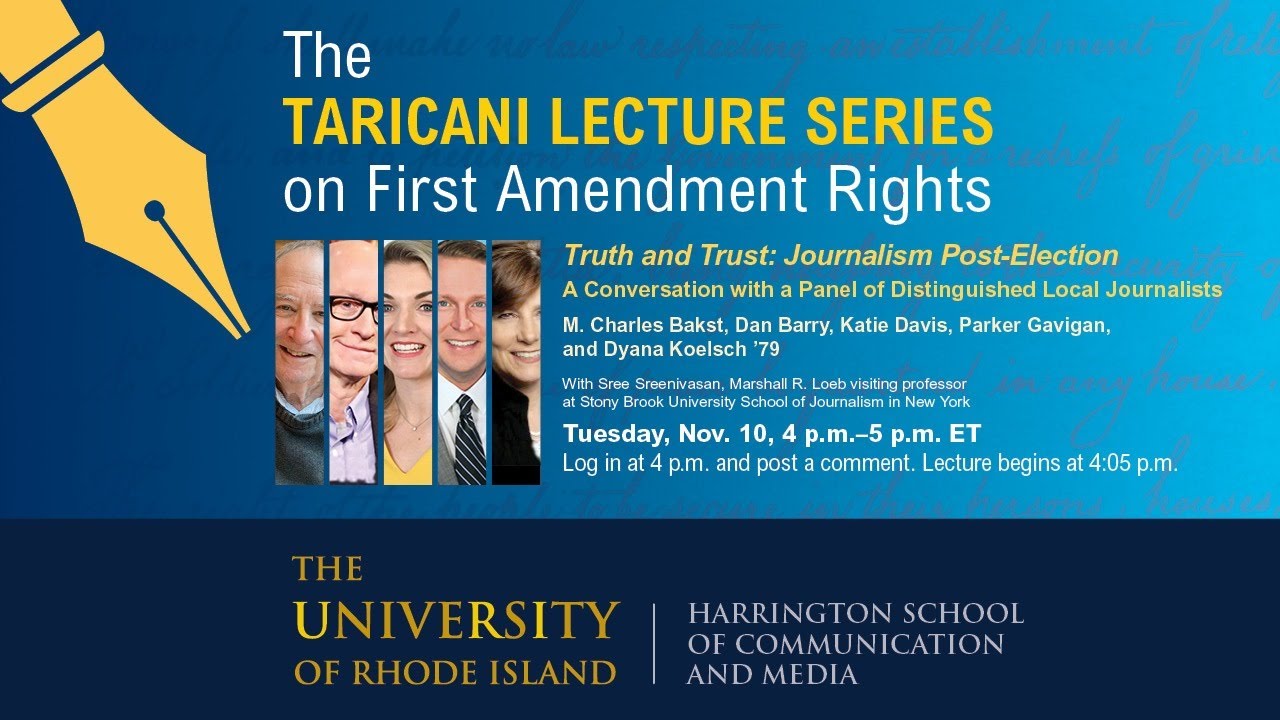 A panel of Rhode Island journalists explore the importance of the First Amendment in their work.

A panel of Rhode Island journalists – Katie Davis and Parker Gavigan, investigative reporters with WJAR-TV; retired, long-time political columnist M. Charles Bakst of The Providence Journal; and Dyana Koelsch, a print and broadcast news reporter for two decades and now public relations professional – explore such timely topics as the role of media in covering this election, the journalist’s dual duties as educator of the public, especially in times of crisis, and as watchdog of government officials, and the importance of the First Amendment in their work. The discussion includes longtime New York Times reporter and columnist Dan Barry, who was member of The Providence Journal investigative team that won a Pulitzer Prize in 1994 for exposing corruption in the state court system. He has twice been a Pulitzer finalist with The Times for coverage of Hurricane Katrina and the Great Recession. He is also the author of five books, including “This Land: America, Lost and Found,” a collection of his national “This Land” columns. Katie Davis, who joined NBC 10 in 2010, is an Edward R. Murrow and Associated Press award-winning reporter. She won her second Murrow Award for investigative reporting in 2013 for a series of stories on sexual abuse by Catholic priests in Rhode Island. An investigation of the lack of fire inspections in Providence nightclubs, a decade after The Station nightclub fire killed 100 people, earned her a Murrow award and an Emmy nomination. Parker Gavigan has been a member of WJAR’s I-Team since 2013, working on reports that have included exposing a questionable state beach contract that was awarded to a sitting state representative. Gavigan was awarded a D. Tennant Bryan Award in 2014 for surveillance and undercover work that revealed a town employee who was working on his own properties during work hours. Dyana Koelsch, a URI graduate with a degree in journalism and sociology, was an award-winning political and investigative reporter at WJAR in Providence for 16 years, including working with Taricani on his acclaimed I-Team. Owner and president of DK Communications, Koelsch has worked in public relations and marketing for the last 15 years, specializing in crisis communication and reputation management to a broad spectrum of local, regional and national clients. Her work has included serving as a consultant to the campaigns of U.S. Sen. Sheldon Whitehouse and U.S. Rep. David Cicilline. For more than 40 years, M. Charles Bakst was a reporter and columnist for The Providence Journal, known for hard-hitting political commentary and holding public officials accountable. Since retiring in 2008, Bakst has worked as an informal, unpaid adviser on several campaigns, including those of Governor Gina Raimondo and General Treasurer Seth Magaziner, and continues to contribute his sharp insight to more than 3,000 “friends” on Facebook.

“Truth and Trust: Journalism Post-Election” streams live at 4 p.m. on Tuesday, Nov. 10. The discussion is moderated by Sree Sreenivasan, a journalist and the inaugural Marshall R. Loeb visiting professor at the Stony Brook School of Journalism. The free, virtual lecture is open to the public.